Once in a Blue Moon

The exhibition will run through MAY 2019.

se! is proud to present the group exhibition ONCE IN A BLUE MOON.

The phrase “once in a blue moon” suggests something that happens only very rarely.

Although it is tempting to suppose that something that happens very rarely is equal to the impossible, it isn't so.

Actual examples of the moon appearing blue is in fact the exception that proves the rule.

The same notion can be held about organizing an exhibition with artist from around the world with ease.

The idea to create a show with small artworks that could be transported easily across the world evolved from a mutual online fascination between the participating artist.

The connection and common interest in working methods is the main focus in the presented works.

For the majority of artists, the use of layers and mixed media is important and often consequential.

ONCE IN A BLUE MOON presents works that deal with the different dynamics of these processes. 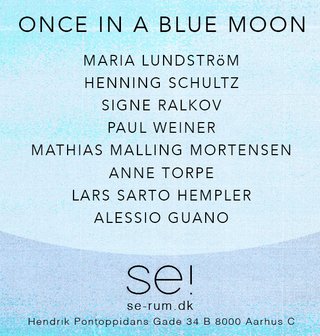